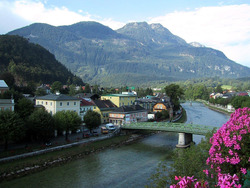 In the late nineteenth century, the spa town of Ischl in the Salzkammergut region of Upper Austria was one of Europe's most fashionable resorts, favoured by the wealthy and the illustrious. Its popularity was enhanced by the fact that the Austrian Emperor, Franz Josef I, and his glamorous wife Elisabeth had their country residence there. The summer months were alive with music, theatre and dance. 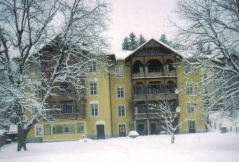 The Chalet Bellevue
Bertha symptoms first manifested themselves when she was on holiday in Ischl with her family. It was here, in the Chalet Bellevue, overlooking Kaltenbachstrasse, that her father fell ill with the illness that would later kill him. At the same time Bertha began to have absences and hallucinations.

Despite these associations, probably because of earlier holidays she had spent there, Bertha retained fond memories of Ischl. She later described it, in a prayer she composed, as her real home:

'…that I may once again tread the soil of my homeland among the hillsides and the meadows - not the great city - but Ischl! I want to see the little flowers along the path, the wild coral-red bloom whose name I don't know and which I love so much, and walk on shady paths amid the fir trees, where quite unexpectedly a tiny brook gurgles - the air, the exquisite air, moist, spicy, unspoiled - soil, resin, cyclamen, to breathe them in just once more in one's life - as in the days of one's youth - just once more!'